Do Wild Garden Birds Like Stuffing & Is It Good For Them? 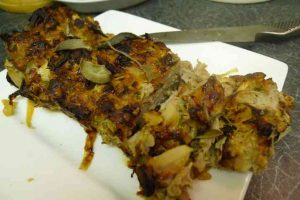 After Christmas is over you might have some leftovers that you don’t want to see go to waste.

There are lots of foodstuffs that birds can eat that are on our Christmas plate of food.

The simple answer is no, and birds should not be fed stuffing in any shape or form.

If your stuffing came from a store then it’s going to be a really bad option for feeding your birds. When stuffing is packaged in a box it’s loaded with preservatives so that the bread doesn’t go mouldy on the shelf.

They dry out and become dehydrated. This is a problem for birds at any time of the year, but especially in the winter at Christmas time when they might have a harder time finding a fresh clean source of water.

The sage that is in sage and onion stuffing is really the only part of the stuffing that is okay to feed to birds so if you want to give them a little Christmas treat try tossing some dried sage in with their feed. It will help their digestion as well as supporting their liver function.

The other ingredients in stuffing should be left off your feeding list for your garden birds.

Stuffing is mostly made from bread. Bread isn’t good food for your garden birds regardless of where it comes from. Bread expands in the stomachs of birds and fills them up quickly.

However, bread has none of the nutrients that birds need. They’ll stop eating after a little bit of bread because they feel full; however, they didn’t fuel their bodies at all and will end up hungry later in the day. Birds are very active creatures with fast metabolism and they need high energy food to fuel their activity.

Foods that are high in protein and fat are healthy for birds while the bread is the opposite and ends up draining them of their energy while providing no nutrients.

Sage and onion stuffing doesn’t just contain bread. It also contains onion, even if the onion is dehydrated and packed into a box. Onion is bad for garden birds. In fact, it’s toxic to them and can cause serious injury or even death.

There’s a compound in the onion that irritates a bird’s stomach and the lining of their throat to the point of causing ulcers. These ulcers can cause the rupturing of red blood cells which results in a blood sickness called anaemia.

Birds should never be fed onion and although it may seem like the amount in the stuffing wouldn’t hurt them, it could, and you should steer clear of anything that contains onion including sage and onion stuffing.

Can These Articles Help?